Elliott and I got home last Thursday, after staying over a week longer in Missouri than we had originally planned.  Someone very important to me was in the hospital and ended up passing away.  It was definitely not the best vacation extension. And it brought back a lot of memories of our unplanned trip last August/September when my dad was in the hospital and then died.

Since we've been home, it seems like we have been rushing from one thing to the next, without much time in between.  I think that's pretty normal for December, though.  Saturday one of Elliott's best friends had a birthday party 30 miles away.  Sunday was church with a few extra things thrown in.  Monday was the Christmas concert for Elliott's friends that are still at his old school, so we went to that.  Yesterday afternoon we had meetings that I had to attend.  In between those things, I've finally managed to get everything unpacked, although I do still have laundry left to do.  Our car was really loaded down with stuff on the way back up, since we had all of our souvenirs, a bunch of Christmas presents from back home, plus the stuff that I bought on black Friday, along with all of our clothes and other items that we took down.  My husband drove home the week before in his Dad's car that we are trying to sell, and had it pretty well loaded full, too.  I guess that means I would have spent a small fortune in shipping other wise. :)

While we were on vacation we had a great time, though.  We went to Lego Land, Sea World, and Walt Disney World.  The weather was good almost every day.  Rain only changed our plans one day.  There were two days that were "cold" by Florida standards, but with a hoodie on, we were definitely warm enough.  I'll try to post more about our vacation soon, including pictures.  Right now we have to get back to school, though.  We kept up on it somewhat while we were on vacation, but we definitely need to get adjusted back to a more structured day.

Posted by Carla at 9:34 AM 3 comments: Links to this post

I can't believe it's been almost a month since I've posted on here.  I had been doing so much better, too! :)  But things have been incredibly hectic here.  I've barely been home long enough to homeschool Elliott lately, so I haven't had time to do much else.  In fact, I think today is only the second day in the last 4 weeks that we haven't spent the majority of the day away from home.  And we leave for vacation tomorrow, so it will be a long while before we are home again!

Between my husband and I we have been to the doctor 7 times this month.  We're both fine now, but it has included way too much time in waiting rooms.  Elliott says the waiting rooms tire him out immediately.  Haha. Carl has needed a driver for the majority of his appointments so Elliott and I had to go with him.

Somehow it slipped my mind until about 3 weeks ago that we were going to be gone the week of collection for the Operation Christmas Child boxes.  My sister and I set a goal of doing at least 50 this year, so we have been really busy working on those, too.  We had over half the stuff already, but still had to go buy quite a bit more stuff.  Then we spent several hours sorting and organizing.  I am happy to report that we got almost all of them done, so my sister just has to pick up puzzles for a few of them, and hard candy for all of them and they will be ready to go. :)

We've also been busy with all the regular things that homeschool families have to do.  It's been unseasonably warm, too, so we've tried to take advantage of that and do more of our lessons outside.  We don't normally have pretty autumns here, but this year it's beautiful.  We've done a few fun fall projects with leaves and other things we've found in nature.

We leave for vacation tomorrow, too!  So of course there are all the plans that go into that.  I am definitely a planner, so I have spent an unreasonable amount of hours planning and budgeting, and replanning things on our vacation this month.  Haha.  It's paid off, though, I think.

I will try to update my blog at least once while I'm on vacation, but no guarantees.  I haven't tried blogging on my new phone (which I also got this month!), so I'm not sure how that will work.  I can use my tablet if I am somewhere with a decent wifi connection, though.
Posted by Carla at 1:50 PM 3 comments: Links to this post

A few weeks ago my family was given the opportunity to try typekids.com.  We had been looking for a typing program for Elliott for a while, and had just decided to give up for now and wait until next year.  Then I received notification about typekids.com.  I decided to have Elliott try it out, and he LOVED it.  He says it is the best typing program he's tried, and he tried several before this one.  After I looked it over and watched Elliott do a lesson, I agreed with him.  It was the best one we had tried.

One of the things that I like about it is the way it moves from lesson to lesson.  He isn't done with the program yet, but so far he hasn't had much trouble learning the new stuff in each lesson.  The lessons do get progressively harder, but they build well on stuff that has already been covered.  It seems to be set up better than the last typing program we did in that aspect.

Another thing that I really like about it is that the graphics are appropriate for his current age and interests.  It's pirate themed, but not too busy.  We like the theme and feel like it really is age appropriate for the intended audience of 8-14 year olds.  Elliott isn't especially into pirates, but still thought that everything looked cool.

One of Elliott's favorite things about the program is the games.  There are cool little games that can be unlocked after he finishes the lessons.  That is by far his favorite part.    He really likes the shark attack game.  He says he likes it because of all the action.  He likes the other games, too, and is looking forward to unlocking them all!

We received this program free of charge in exchange for an honest review.  The full price of the program is $89.95.  The program consists of 30 lessons.  Would we have paid $89.95 for this program?  Quite possibly, since after trying the first free lessons Elliott couldn't wait to continue.  After trying more lessons, we do really think it is worth the cost, too.

We will be doing another review in a few more months after Elliott has finished the program.  We haven't moved as fast through it as I thought we would, because things have come up and we have been super busy lately.  We haven't had time for much more than the basics lately and Elliott has been doing a lot of his school work in the car or while we are waiting for an appointment.  Things have finally started calming down, though, so we are hoping to find time for it more regularly when we return from our vacation.
Posted by Carla at 1:31 PM No comments: Links to this post

It was hard to get a good picture, but this is what happens anytime Minnie is around at math time.  She just loves to be in his books, but especially his math book. 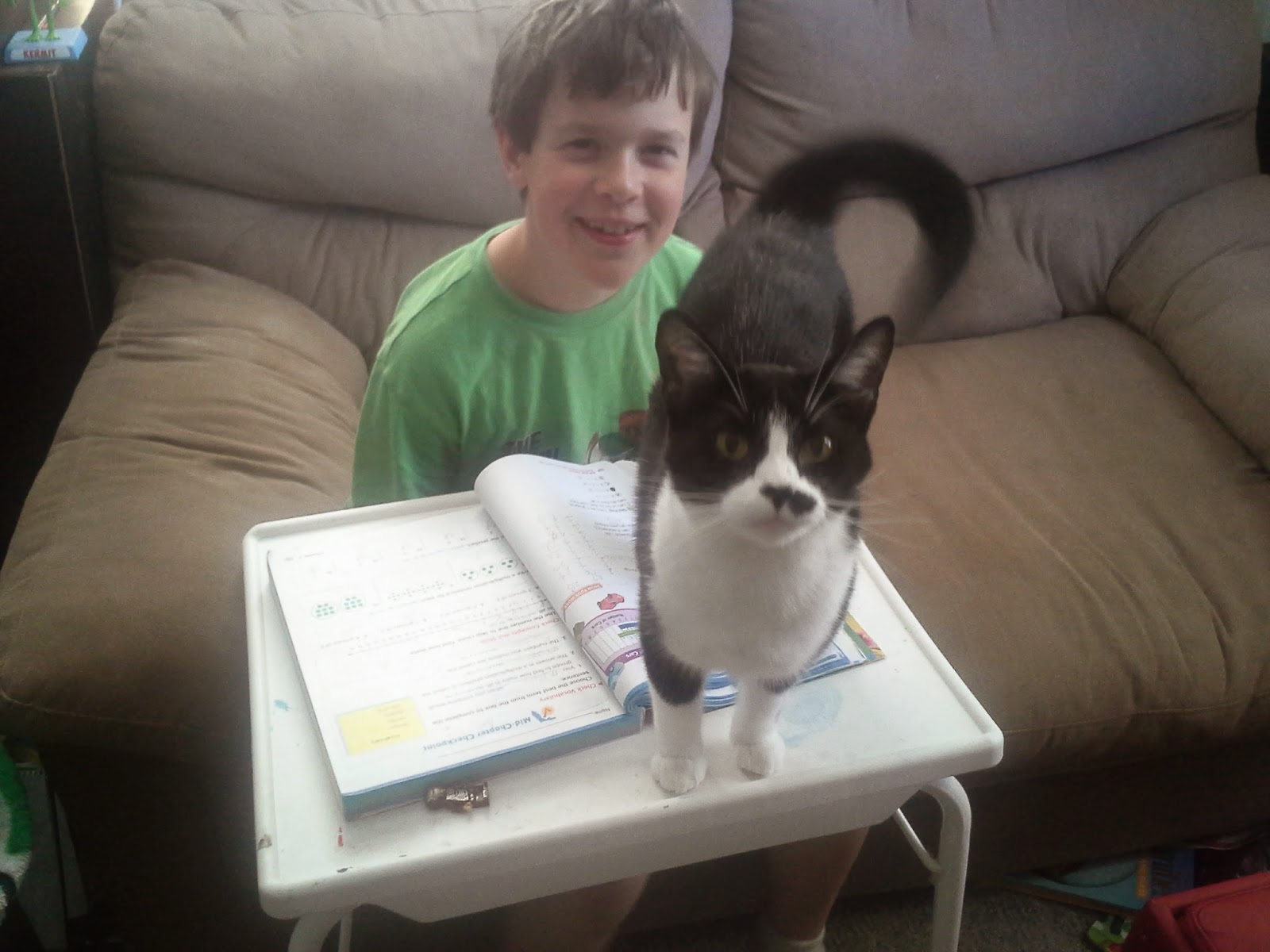 We are getting really excited about our upcoming vacation now.  We've made reservations for our hotel stays and we've made a few dining reservations.  We've spent hours looking at Disney maps trying to decide how much time to spend in each park.  We have made outlines and plans and budgets and revised them all several times.  In some ways, I think planning may be the part that Elliott and I like the best. :)


Now that we are getting closer to the time we leave (just over a month until we leave for Missouri, and we'll be heading to Florida 10 days later), we are solidifying more of our plans and getting even more excited.  We've started doing a few Disney themed things in school this week, too.  Elliott has been doing Disney themed coloring sheets while I read aloud (I've discovered if Elliott is coloring he listens better if he doesn't have a book to follow along in), and I've made a few worksheets that are Disney themed, too.  They have been a hit and have been the best part of the day according to Elliott both today and yesterday.  He doesn't even seem to mind that he's doing more advanced work than he thinks he can do on his own. ;)

Elliott has been really excited about helping with the planning this year.  He helped me decide on a rough schedule and helped make decisions about where we should eat and when.  It actually means we are eating meals at odd times twice, but I actually agree with Elliott that it's worth it to eat at those times if it means we get to eat at the restaurants he chose. :)  Last time we went to Disney World we only made dining reservations for a character breakfast, and chose counter service meals the rest of the time.  This time we want to try a few different restaurants that we thought looked cool.


I think it's more fun doing the planning this year with Elliott being so excited about it as well.  My husband is kind of a by the seat of his pants guy, so he just rolls his eyes when Elliott and I get excited about plans.  Haha.  He does admit that my planning does help us make sure everything gets done, though, and admits that things wouldn't go nearly as smoothly if he was in charge.