We started homeschooling this summer, but only a few days a week. I wanted to ease into it, both for my sake, and my son's.   I wanted him to still have plenty of time to play with his friends over the summer as well.  He's pretty lucky that most of his best friends live close enough that  they can ride bikes to each other's houses.  The one that does live in the next town over has a pretty cool mom, who is willing to bring him over here, or pick him up from here, or even both if she needs to.  So he really got to see all of his closest friends quite a bit over the summer.  I'm really hoping that continues, even with them starting school this week.  I think since we are going to be making the effort, it shouldn't be a problem.  The parents are all on board with planning play times and sleep overs through out the school year, so Elliott is pretty excited about that.

This week Elliott's friends go back to school, so we start going full time, too.  We plan on following the school calendar pretty closely, other than while we are on vacation in November.  He also gets a 4 day weekend for Labor Day instead of just the 3 day weekend his friends get.  That Friday is my birthday, though, and also the one year anniversary of the day my Dad died, so I'm fairly certain that I wouldn't be able to teach very well that day anyway.

We are both pretty excited about homeschooling.  Elliott has learned a lot of stuff, and really enjoys most things we do each day.  To me, the biggest issue is getting everything out and putting it all away again.  We don't have a designated spot to work on it right now, because my husband is working on the flooring in our bedroom.  That means we are sleeping in what was supposed to be the classroom since we can't have any furniture in our bedroom.  After our bedroom is finished, we are going to move Elliott into the old classroom and work on the flooring in his room.  We might just leave him in the old classroom, though, and turn his current bedroom into the classroom.  We haven't decided for sure yet.  Either way, I'm hoping that at some point in September I have a better place to work. :) Right now, my living room couch looks something like this during the school day. 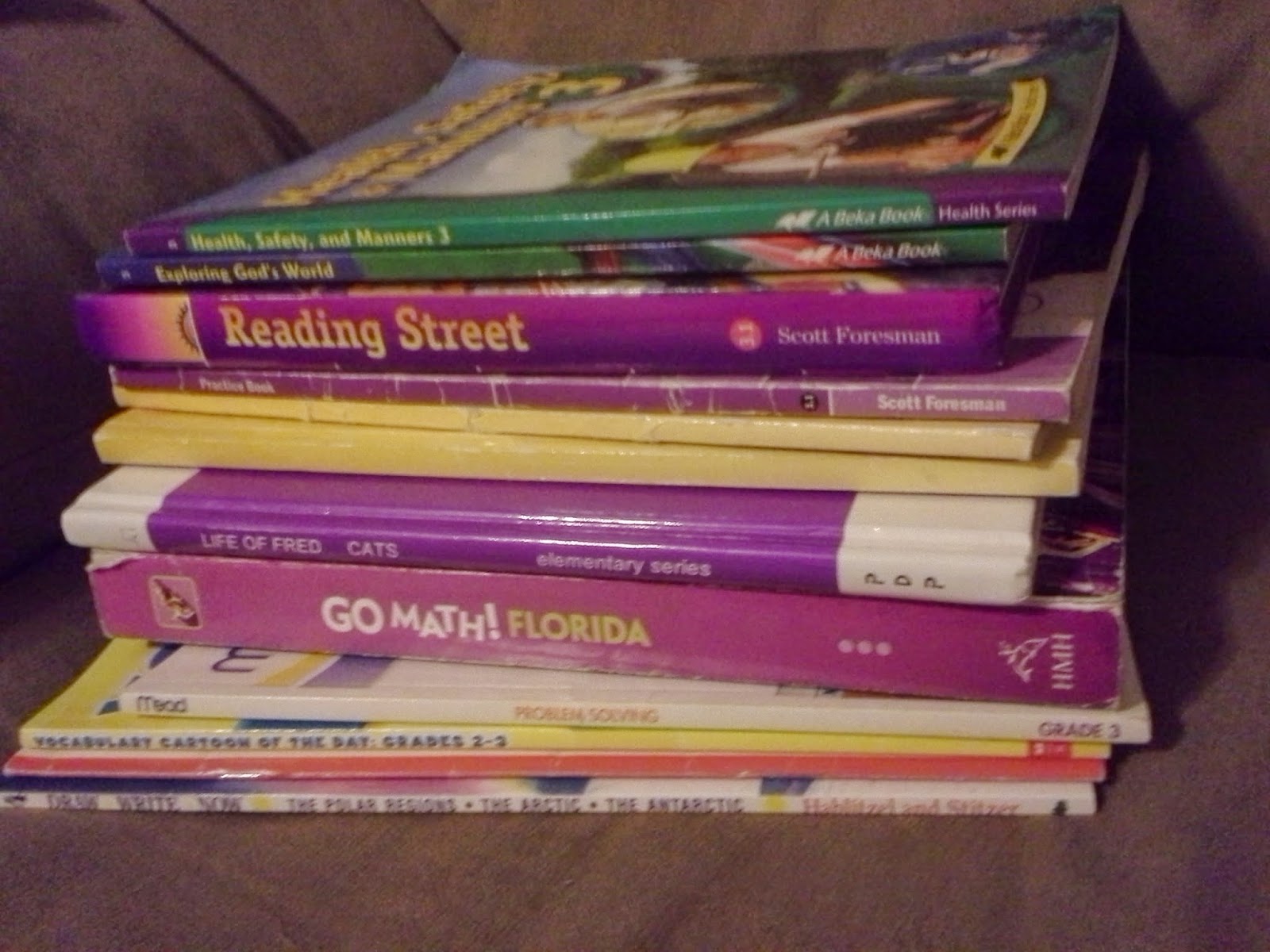 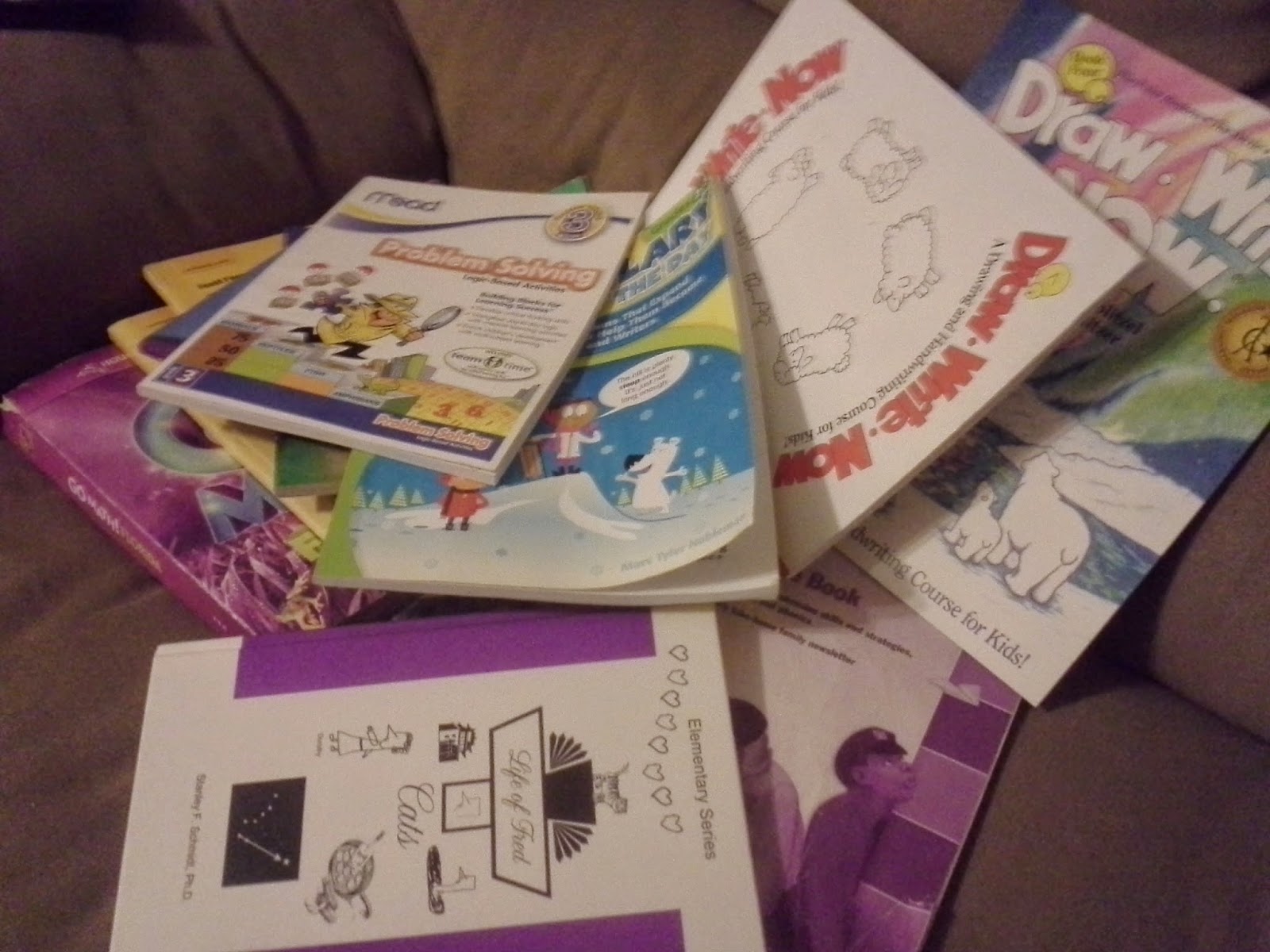 We start out with his books in a neat stack.  As the day goes on, Elliott certainly doesn't keep everything nice and neat.  He digs through the pile to find the next subject, and things become a mess.  It doesn't matter what order I put his things in, we will end up doing them in a different order that day anyway.  Haha.  This pile doesn't include everything he does.  He also has Bible, Spanish, handwriting, and social studies, that just didn't make it into the picture for some reason.

Even though we have a chaotic mess in our living room every day, and some days it drives me crazy, we are really happy with our homeschooling adventure so far!  I feel more at peace with this decision than I ever did about him being in public school.  And it's just amazing to me when he learns something new that is supposed to be well beyond his years.  Don't get me wrong, we have our moments (and sometimes entire days!) when one of us is unhappy with homeschooling.  We've had tears, frustrations, and over all bad attitudes more than I care to admit.  But more often than not, at the end of the day, we can both say we learned something, and homeschool is the right choice for us.
Posted by Carla at 6:28 AM

Email ThisBlogThis!Share to TwitterShare to FacebookShare to Pinterest
Labels: back to school, homeschool

I love that you both get excited about schooling. :) You're lucky he has friends close by. We're out here in the country and it's hard for the kids to visit spontaneously.

Glad to hear homeschooling is still working out. I sometimes think homeschooling would be the better way to go. Less time being distracted by other students, more time for learning.

I am so happy to hear that it is going well for both of you. I will admit I don't think I could do homeschooling full-time - actually I know I couldn't.

Still, I will admit that I am getting a bit frustrated with kindergarten, because we do not have a gifted program in kindergarten at our school. Our youngest son just turned 5 and started kindergarten last week, but he is so ahead that I feel as if I am the one teaching him everything.

Still, I just hope he'll get into the gifted program in first grade, so that I can take a step back.

I gotta say though Carla,it must take a lot of patience to homeschool full time. You are too awesome! I hope Elliott knows what a great mom he has.