Friday I had to meet my husband after he got off work so we could run a few errands. We wanted to hit the 75% off clearance toy sale at Target, and since I already had to go on base, I decided I should run to the commissary for a few things we needed. My four year old son was hungry anyway, so off we went. When I got there I was surprised (and happy!) to find that one of the things that was on my list for Target was actually on sale much cheaper at the commissary. I had 14 $.75 off Snuggle coupons that I was planning on splitting up between the commissary, Target and Walmart, since the commissary had the best price on the dryer sheets, Walmart had the best price on the big bottles, and Target carried my favorite scent. Well, this weekend the commissary had a huge display of the 32 load Creme Jojoba scent bottles marked down to $.99 each and a bunch of the peach blossom and sunshine dryer sheets marked down to $.89 each! I couldn't pass that deal up, so I ended up using ten coupons on the liquid and the other 4 for the dryer sheets.


I also had several other great coupons I wanted to use including some $1 off Mueller's pasta coupons (printable at their website), some Pace coupons, Starkist coupons, a Johnsonville coupon, and some really great KY jelly coupons! Here's what I ended up buying for under $13! I also bought a Lunchable, but my son ate it in the car. :) 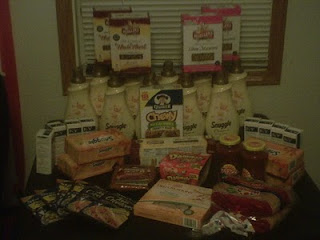 I used over $44 worth of coupons, and my total was just under $13, including the surcharge. So just with coupons, I saved around 80%. If I went off full retail, the savings would have been MUCH higher, since so much of what I bought was on sale.
Posted by Carla at 2:29 AM

You did fabulous Carla!