A Discount Vacation to Disney!

My husband deployed last May, and was gone for six months. Before he left, we decided that while he was gone, I was going to plan for, and save for a Florida vacation in March. We had been kicking the idea around for a while, but didn't have a set time or plan until that point. He put in for leave, and I started looking for great deals.

There are so many websites and blogs dedicated to planning for a Walt Disney World trip that it was overwhelming at first. Since my husband is active duty military, we knew that it was a no brainer to buy the discounted tickets offered to military members and their family and friends. Those tickets include 4 days at the parks, and one upgrade (park hopper or water park fun and more) for $138. You can add the second upgrade as well and pay a total of $165. We decided to add both upgrades, once we decided we would be spending a full week at Disney World. The regular price of the tickets with both upgrades would have been over twice the price that we paid per ticket for everyone, even including my five year old son.

Our next big decision was where to stay. Since we were going in March, we knew that it would be busy, but not crazy. We really went back and forth between staying off property, or staying at the military only hotel, Shades of Green. We ultimately decided to stay at Shades of Green, because transportation would be easier (we drove, but none of us are overly fond of trying to get around every day in a place we don't know), and we would have access to the extra magic hours every day if we didn't stay there. I wasn't positive that the extra magic hours would be worth it, since I had heard conflicting reports. It turned out to be really worth it for my family, though. My barely five year old even enjoyed the extra hours, both in the morning and late at night (he was up until almost 3 am one night, after an extra long afternoon nap!).

In order to save even more money, we shopped for easy food items before we left home. We bought things like poptarts, stuff for peanut butter sandwiches, nutrigrain bars, dried fruits, Ritz crackerfuls, and things like that. We also included some things that can be heated quickly in the microwave, like Chef Boyardee. My family doesn't normally eat that much processed food, but I knew my choices were either things like that, or fast food every day, and the processed food was much easier on the budget, leaving more money for things like souvenirs, and dining experiences that we would really enjoy. We also chose to eat out once each day. 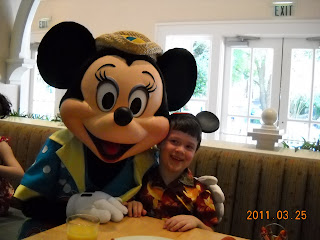 My son really wanted to do a character meal, so I researched them to find one that we would love. We ended up choosing to have breakfast with Minnie, Goofy, and Donald Duck at the Cape May Cafe at the Beach Club Resort. Choosing breakfast allowed us to save quite a bit of money, and choosing to do it at a hotel, instead of in one of the parks allowed us to do it on one of the days we weren't spending in the parks (remember we had four days in the parks and were there for 7 days), so we weren't in any hurry, and could relax. I'm glad we chose to go with a cheaper option, because it was still expensive. And honestly, my son didn't even enjoy it anymore than he enjoyed just meeting the characters throughout the parks (which is totally free). I don't think we will be doing a character meal again.

The last great savings we found was on the trading pins. My son was really excited about them after we looked at some online. I was not so excited on the price, but knew that a lot of the ones on Ebay are knock offs, so didn't want to go that route. When we got to WDW we found a great deal that we couldn't pass up, though. At most of the stores there was promotion where you could get a starter lanyard with 8 pins for $15.95 (most pins are $6 or more each individually) with a $40 purchase. Since we had a lot of souvenir shopping to do, we broke up our purchases over several days and ended up with several of the lanyards. My son ended up keeping one lanyard set and trading the others throughout our vacation. He ended up with a lot of fun pins, some worth $10 or more, and we only paid $2 each. This way he was also able to collect pins that are no longer for sale, and he had a lot of fun working on different collections. Like, for instance, he traded for every Stitch pin he could find (his sudden favorite Disney character after meeting him), and ended up with 5 or 6. He also had fun collecting all but one of a set of Mickey Mouse pins, and finding the nerd pins for my sister. I do think that was something we did that was definitely worth it!
Posted by Carla at 4:08 PM