The Kohl's in Minot just opened this month.  I've shopped online at Kohls.com a few times a year for the last few years, but I've never done much in store shopping.  It's not usually one of the places on my "Must shop" list when I'm in Missouri, and we just don't really do much shopping for anything other than souvenirs when we are on vacation elsewhere.  There is a Kohl's in Bismarck, but we only go there 1-2 times a year usually, and we only go to Kohl's when we have gone to Bismarck specifically to shop, or when Elliott and I are just along for the ride while Carl has some EMT conference or something.

Anyway, we've been to Kohl's twice now since it opened.  Obviously there's not much of any clearance yet, but we did find some decent deals on stuff that was on sale.  I take the "You saved...." part of the receipt with a grain of salt, because I would never pay full price for stuff at a place like Kohl's.

We had a 20% off total purchase coupon that was only good this past weekend, so we decided to go look at some summer clothing after church Sunday.  We spent a while looking at boys' clothing, but decided we didn't even want to pay the sale price minus 20% on much, since we actually still have a while before we'll need to use summer clothing anyway (it's 9 degrees right now).

We did find some pajamas that he liked and that were within our price range.  I noticed when I was going through his clothes recently that he didn't have any lightweight pajamas at all in the size I want him in (he can still wear a size smaller, they are just too short).  We found a 2 pack of pajamas with a short sleeve shirt and lightweight pants on sale for $22 (normally $44) and another set that had a short sleeve top, shorts, and lightweight pants for $18 (normally $36).

We also decided to look for workout clothes for me and found a pair of capris for $18 (normally $30). 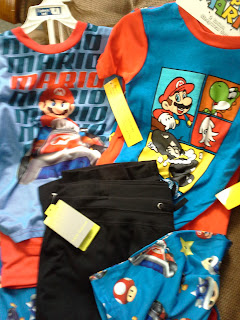 I like the clearance racks at Kohl's. The prices on those items rock.

Glad you found a few things that you like!

Those "you saved" things at the bottom of the receipt are such a joke. Yeah, like I would have spend $25 on a tee shirt everyone else has for $7. My husband always makes his eyes real big and gushes OMG REALLY?! I saved that much!!! They never know what to make of him when he does that lol.

I do like the clearance section, but find most of their prices are tagged with what they had them listed as their sale prices a few months back. I only buy from them when I have a 30% coupon from my charge card.

We don't really have a lot of shopping options here, although we have gained A LOT in the last two years, and are supposed to be getting Gordman's this summer. So I'll probably head to Kohl's somewhat regularly, but never without a coupon of some kind.

I don't like paying full price for clothing anywhere, and pretty much only do so when I have to. But even then I go somewhere much cheaper than Kohl's, if I have that option. :)