One of my favorite hobbies is scrapbooking. I've always loved the idea, but have only really started working on layouts regularly during the last few weeks.  As most of you probably know, scrapbooking isn't a cheap hobby.  Because of that, I don't go to Hobby Lobby very often.  But because Elliott and I have been doing more scrapping lately, we decided to go last week and check what they had on clearance. When my basement flooded last summer, the scrapbook I was working on was easily found, but my stickers, scissors, etc, all magically disappeared.  I've been looking and looking for them, but still haven't found them.

We printed out a 40% off on any one item coupon to use on the Disney scrapping paper Elliott's been asking for, since he's really looking forward to scrapping our Florida vacation from March.  We found several clearance buys on stickers that we liked, as well. We're still behind on scrapping other stuff, but most of what we bought was for the Disney scrapbook that we are starting today.  Elliott's really excited about actually being able to journal some of his own thoughts and feelings in this one.  Since it wasn't JUST a Disney vacation, we bought plenty of other beachy stickers as well.  And the dog and cat ones he needed for his regular scrapbook since we routinely scrap pictures of him and his dogs and cat, as well. :) 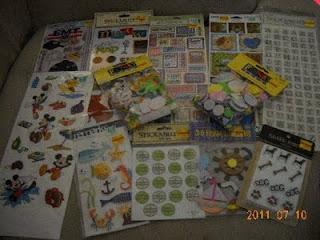 All of these stickers were on clearance for at least 40% off, and many of them were more than 50% off.  I'm not sure exactly how the markdowns work there, but there were a lot of fun stickers at my store.

We didn't buy anything at all that was regular priced, except for the Disney paper (not pictured, but it's a 150 page 12x12 pad).  And we were able to use a 40% off coupon to get it for $11.99.  So we saved a little more than 50% of the total retail value of everything.  Not an outstanding day (this week a lot of stickers, scrapbook papers, etc are all 50% off), but not a bad day either.  We actually went back yesterday to buy a few more things that we had considered buying but thought cost too much.  But with the 50% off sale the prices were right up my alley. :)
Posted by Carla at 5:09 PM

You got some great savings Carla! I have heard so many great things about that store, but we do not have it down here.

I go to JoAnn's with my 50 percent off coupons for scrapbooking supplies...I just wish I had more time to get my stuff organized.

Time is definitely an issue for me as well. I've been putting aside a little bit of time 2 times a week where we do scrapbooking instead of other preschool projects for the last few weeks, though, and that has really helped. And it also helps Elliott with preschool since he cuts, glues, etc. :)

I was REALLY excited when Hobby Lobby came up here. We have a JoAnn's, too, but I rarely go there.