I posted yesterday that we went to Target on Friday.  Elliott had birthday money to spend, so he was looking for good deals.  We decided not to buy any Lego sets on Friday, since we hadn't had Elliott's birthday party yet, and we thought he would probably get some at his party (I was right, he ended up with 5 or 6 sets at his birthday party, in addition to the one that my husband and I gave him at his party). 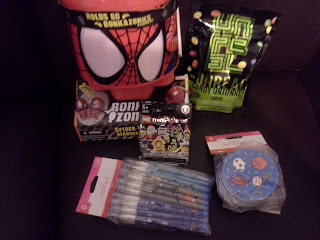 Elliott ended up buying a TobyMac CD for $11.99 (not pictured, it's still in the van, where we listened to it all weekend), and the BonkaZonks Spiderman storage container on 70% off clearance for $5.98.  He also bought a Lego Minifigure for $2.99.  Also pictured is the candy I bought him ($4.39), and the pencils and notepads ($3 each) I bought for his goody bags at his party, since I thought I had misplaced some of the treats I had already bought. 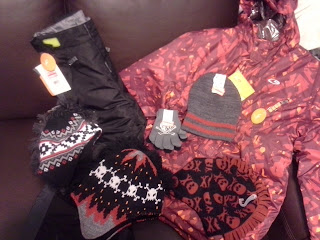 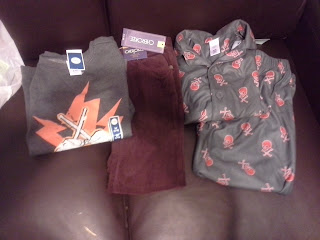 Elliott also started looking around at other things and ended up finding the above items for 70% off.  We had decided before that he didn't need more clothing, but he convinced Daddy that he NEEDED these clothes. lol  The sweatshirt was $2.08, the pants and the pajamas were each $4.48.

Don't you just LOVE Target clearance? You got some fab deals there!

They had Neiman Marcus dresses for $100 around Christmas. I loved them, but couldn't justify the price. My daughter got asked to be a bridesmaid in her cousins wedding, so we watched those dresses like a hawk, and was able to get one at $30 when they marked them down 70%. Score! You can't beat a $30 bridesmaid dress!