Going to the Zoo

Many of you guys know that Minot had a devastating flood in 2011, and recovery has been an ongoing thing since then.  Our zoo is located right on the river that flooded, so it's repair work has been rather extensive.  They knew the flood was coming and got the animals out, but some of the structures were total losses, or very nearly so.  The zoo was closed last summer and almost the entire summer before as well.  But I'm happy to announce that it opened back up last Saturday, albeit without all the animals.  :)  We should be getting the rest back over the next few weeks, though.

Saturday, May4th was opening day, and it was pretty crazy.  We went for an hour or two, to support the zoo, and see what animals were back.   We went ahead and bought our season tickets and are really looking forward to going to the zoo quite a few times this summer. 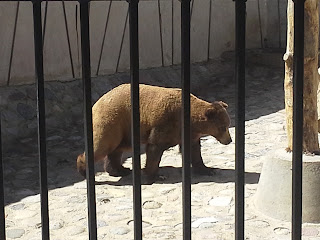 The bears have always been favorites of ours.  We think they are funny and cute.  There used to be a food dispenser so you could throw them some food, but it's not up now.  Maybe it will be back next time. 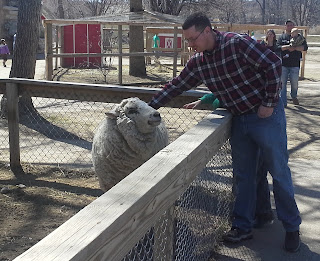 The petting zoo area is another one of our favorite areas.  I didn't get very many good pictures over there on this trip, but I thought that this one, and the one below, with the donkey were both okay.  I'm not sure if I've ever posted pictures of my husband before, but that's him. :)  And of course that's Elliott, although you can't see his head in either of these shots. 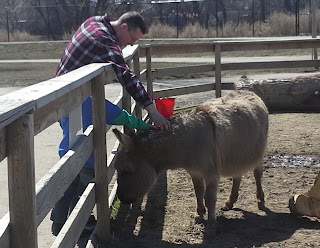 Some of the other animals that were already back included the wolves, bobcat, warthogs, kangaroos, and various birds. Most of the big animals aren't back yet, and neither are the penguins (one of my husband's favorites).

Glad to hear the zoo is back up and running! I can't imagine a summer without a trip to the zoo!

The petting area is always a favorite of ours too :)