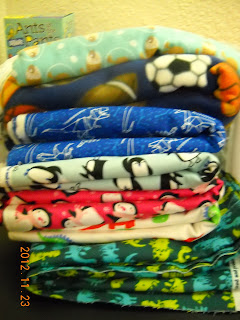 My family and I went to Joann just a few minutes after they opened on Friday.  Elliott had been asleep in the car for a while by then, but woke up to go in and pick out new fabric.  They had Snuggle flannel fabric on sale for $1.74 a yard, and fleece for $2.99 a yard.  The fleece was part of a three day sale so we had a 25% coupon that worked on it, to make it just $2.25 a yard.  So we picked out several different patterns and got a few yards.  The line was long to get to the fabric counter, but it was moving fairly fast considering there were some people with upwards of 20 different kinds of fabric in their cart!

In addition to the fabric, we also bought a Disney Cricut cartridge for $25 (this has been on my wishlist for quite some time, and this is the cheapest I've found it, although I've looked periodically for about a year now), some scrapbook paper boxes for $3.99 each (they qualified for 25% off, so $3 after the discount), and a sewing kit for $11.99 (which also qualified for a discount, making it $8).  My husband's favorite find was probably the thread cabinet, though.  It was loaded with 100 spools of thread, and was on sale for $89.99.  It also qualified for the 25% off so we paid less than $67 for it!  We've been doing a lot more sewing lately, and obviously are planning on doing quite a bit more in the near future.  It will definitely come in handy, and it's nice to have it all together in one place.  There are so many great colors, too!