Saturday after Elliott's basketball game we needed to run to Target for just a few things, so we decided to go to Old Navy, too, while we were already at the mall.  Elliott got several giftcards for Christmas this year, and Old Navy was one of them.

Of course anytime we walk into Old Navy, the first place we head is to the boys' clearance section.  The only item I was specifically looking for was another pair of pants for Elliott to wear over his gym shorts on practice days at school, and to and from basketball games.  We lucked out and did find a pair of fleece pants that will work nicely for that purpose, on clearance for $3.47.  Elliott found several other things he wanted as well, but ended up narrowing it down to just 2 long sleeve shirts ($6.49 and $4.49), and an Angry Birds hat ($4.47).

After looking at boys clearance, we headed over to ladies' clearance.  I found a half zip pullover for $3.99 and a pair of summer khakis for $5.97. 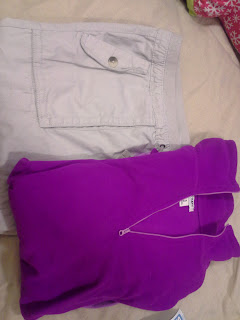 Then we went to outerwear, and found a 2 pack of Magic Gloves for $1.47, a scarf for $1.47, and a fleece scarf, hat, and gloves set for $3.97.  It seems like Elliott loses a hat or glove every single week, so we go through a lot of them.  He also wears two pairs of gloves at the same time, because he says he can't move his fingers in the thicker gloves, and it's way too cold here to play outside with just a pair of magic gloves.  His favorite way to wear gloves is a pair of magic gloves, covered by fleece gloves.

Sorry I was unable to include the picture of the gloves, hats, and scarves.  For some reason it won't load properly.  I'll try to add it later.