One of the first places we went on vacation was the Legoland Discover Center in Kansas City, MO.  Kansas City is close to three hours away from my parents' house, so originally we had planned on doing a few things there, and spending one night.  My guys didn't really have anything else that they wanted to do, though, so we changed our plans a bit and drove up just to spend a few hours at Legoland Discovery Center.

Elliott is really into Lego right now. For the last two years, the majority of what he asks for for his birthday and Christmas have been different Lego sets.  He also spends a lot of his allowance on them as well.  So he was really excited to get to go.  We told him ahead of time that it wouldn't be as big or as cool as the actual Legoland in California that two of his friends went to last summer, but it would still be fun. And he did have a lot of fun. 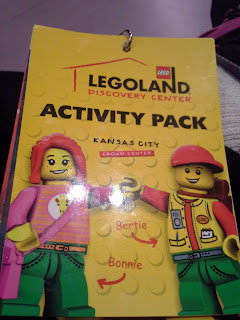 We paid an extra $4 for the Activity Pack when we first walked in.  It had some fun facts, and a few different activities for the kids to do.   The best part for Elliott was collecting stamps at each of the different activity centers, though.  It helped us ensure that we actually made it to all the different centers as well.  And at the end of our trip he was able to show it to the girl at the register and get a button, which he thought was pretty cool. 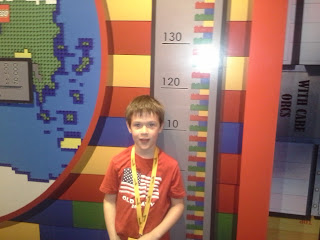 In the first room we went into there was a place to see how much you weighed in Lego blocks, but it was broken, and said everyone weighed the same amount, so that was kind of disappointing.  Elliott was still able to see how tall he was in Lego bricks, though. 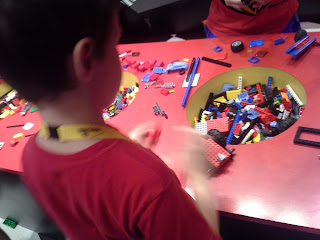 There were several different places where you could play with the Legos to create different things.  Elliott's favorite was the one where you could build race cars and then race them against other people.  Elliott built several race cars, and won a bunch of races. 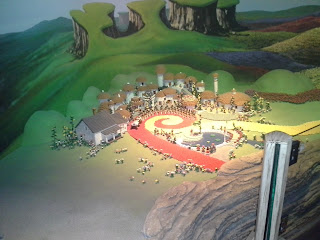 One of my favorite places was the Mini Land.  They had a bunch of different scenes built from Lego blocks.  Since we were at the one in Kansas City they had a great Wizard of Oz area.  Elliott really liked the movie Oz, so he wanted to spend a lot of time looking at that one. 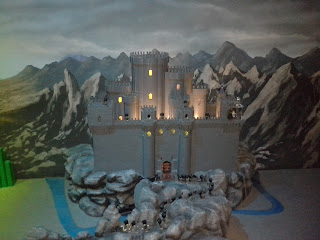 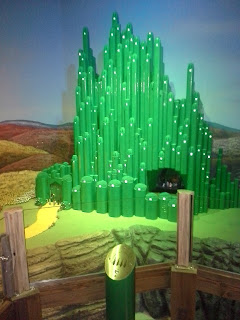 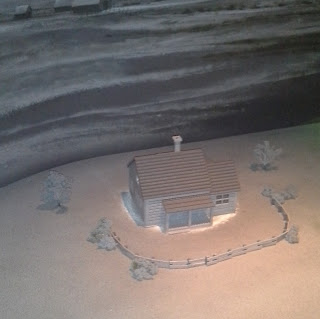 The house actually spun around, which Elliott thought was the coolest thing ever. 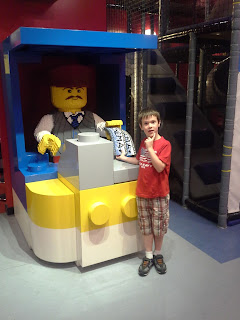 Elliott's favorite part of the whole day was seeing the movie, though.  We saw a Legends of Chima movie in 4D and Elliott loved it, especially when the bubbles came out.  He even went so far as to say it was his favorite movie he had seen for at least a month (and we go to the movies nearly every weekend when there is something playing that is appropriate for him).

There were some rides to ride as well, but I didn't get any good pictures.  I just had my cell phone, and the pictures just aren't good when someone is moving.  Elliott did have a lot of fun on the rides, though, especially Kingdom Quest.

That looks so fun! I have got to see that Wizard of Oz display some day! Glad you all had a great time!

I'm glad you had a good time, and you got a lot of great pics!