Last week my mom was off two nights in a row (she works nights in a nursing home, so this isn't an every week thing), so we decided to go shopping one afternoon.  We called one of my older sisters to see if she wanted to go with us, and she decided to come along.  My mom needed new shoes, so we headed to Famous Footwear first.  I was in search of shoes for both myself and Elliott, but sadly couldn't find anything that I liked for me.  We only found one pair that Elliott liked (I wanted to get him two, one for school, and one for gym), and we had to move up a size in that brand.  He's now in a size 2!  Anyway, my mom and sister both found shoes they liked, too, so it was a decent stop.  My sister bought Elliott's shoes with hers, since they are running a bogo50 sale right now, and then I paid her about 75% of the full value of his shoes, so we both got a good deal that way. :)

Our next stop was Target.  I heard from several people that they had a bunch of clothes on clearance and you could get a good deal.  We couldn't find a single thing we liked that was on clearance, though, in the clothing department.  We headed to the toy department for a few minutes, though, and did find some things there.  I bought Elliott some screws/nails/hinges at 75% off to go with his work bench, and a couple of Kung Zhu pets to play with with his cousins this weekend (they were only $2.50 each on clearance).  That was it for Target.

Our last stop was KMart, and that's where we found the best deals.  The store we went to still had a bunch of toys for 50% off the clearance price, so I was able to score a few small filler items for Christmas and birthday presents for under $2 each.  I also got a couple of Color Wonder books/markers for $4 each.  We love Color Wonder for in the car, especially on long trips. :)

The best deals we found were in the clothing department, though.  All the clearance clothes were an additional 40% off, and they had lots of clearance in pretty much every section.  My mom found some button up shirts she loved for just $2.99 each.  And we found a lot of shorts outfits for Elliott for $4.19 to $5.39 each (originally $9.99-14.99).  We ended up buying a total of 6 outfits, and 2 pairs of jeans ($3.59 each) for a total of $35 and some change.  Not a bad haul! :)  Now all I need is a few long sleeve shirts, and maybe some more long pants (if I can find an excellent deal) and I'll be done with Elliott's school clothes for the year. 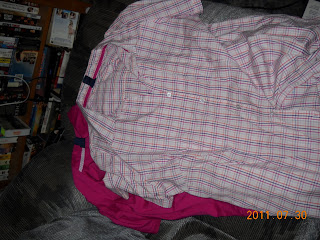 Size 2?!! How is that possible Carla:) My five-year-old is now size 12 I think, but then again he is a tiny fellow.

You always have better luck than me at Kmart, but then again I am not a fan of my Kmart at all. I do need some new shorts, so perhaps I should go check it out before we go on vacation.

Elliott isn't rough on clothes at all, so I've found it doesn't really matter what brand I buy for him, he outgrows them instead of wearing them out, so I just buy whatever we like that we can get a good deal on.

I like the KMart in Minot (although it kinda smells weird in the back of the store. haha). I only like one of the ones in Springfield, MO, though, and if I lived around here I would drive to that one, even if I was closer to one of the others. Tomorrow we're gonna check out the one in Branson. It's been a really long time since I've been to that one, so we'll see if I like that one. I think KMarts in general are very hit or miss.

Elliott has HUGE feet. He's still thin, but he's also tall. He has the same size feet as his cousin in fourth grade. Haha. He's still in 4/5 shorts this summer, but he's outgrown the length on 5 jeans. We bought both 6's and 7's for jeans for school, since 6's are pretty much perfect now, so they'll be too short before winter is over I'm sure.