I almost forgot to post about our coupon shopping trip on Friday.  It was certainly not one of my best trips ever, but it wasn't too bad, especially considering it was kind of rushed.  They were out of several things we wanted, that would have pushed our percentage saved higher.  But after not doing much couponing at all for several months, any savings is good as far as I'm concerned.  The money we saved by using coupons will be going into our vacation fund as well. :) 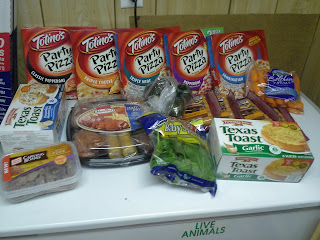 We had a coupon for a different brand of Texas Toast and had incorporated it into our meal plan based on that coupon.  This brand was actually on sale cheaper, so we bought it instead.  No coupons for the spinach, carrots or avocados, we just eat bunches of them. 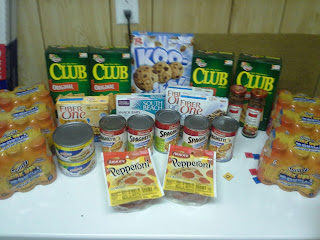 
There were coupons on everything in this picture except the Sunny Delight and the cereal, but I honestly can't remember which coupons went with which products now.  The commissary coupons are all applied at the end, so I can't even use the receipt to help me.

The Sunny Delight had a short expiration date, so they were about 70% off.  They expire next week, but between my son, my husband and my sister, they are already working on the third package, so I'm pretty sure they will be used within just a few days of the expiration date.  This was a huge deal for my son, because I always tell him no on juice drinks that aren't 100% juice.

I bought the cereal because I told my son he had to find coupons to get cereal that we didn't already have (we have five boxes in the pantry), and he found a Cookie Crisp coupon.  Since the off brand was so much cheaper, I bought it instead, and he's still just as happy with his find. :)

A little savings is better than nothing, isn't it? I feel naked when I go to the store without coupons:)

Remember to link up your savings on Friday...

You still found some good deals! I agree with JRFrugalMom. I have to take my coupons with me every grocery trip. I feel so odd when I forget them!

I used to feel the same way with coupons, but decided I didn't have the time to put into them for a while last year while we were remodeling, dealing with health issues, and adjusting to having another person here. I ended up taking a far longer break than I had anticipated, though, and am glad to be back to looking for coupons.