Friday I finally made it to the commissary.  The last time I had been to the grocery store for a big stock up was before Christmas, so it was definitely time.

I ended up spending $180.38.  I know better than to go shopping without eating, but I honestly didn't even realize I was hungry until I was shopping. lol  It was a nonstop day anyway, so that probably played into it, too.

I only ended up using $6 in coupons.  I thought I had my coupons with me, but then when I was looking for them later, discovered that I had left them at home.  So there were a few things I had planned on buying but didn't, but it didn't change my shopping list much.  I haven't had much luck finding coupons for things we use and need lately.

Here are a few pictures of some of the things I bought.  It doesn't include everything we bought, though.  There was a bag that got overlooked at first when I was putting away groceries, we had already put away the eggs, and Elliott has already started putting away some of his snacks and items for his lunchbox.  Plus he and I each had a drink in the car. 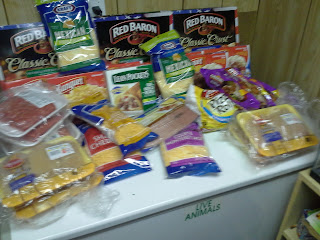 This stuff all went downstairs to the pantry for freezing.  I took this before I repackaged the meat for freezing, but otherwise it all went into the freezer right away.  Cheese was $3 per pound, and my family eats a lot of it, so I usually buy several pounds when it's that price.  Frozen dinners were on sale, and although we don't eat them often, I do try to keep several in the freezer for when my husband's schedule is crazy, or when my sister doesn't have much time to pack her lunch and needs something super fast.  I ended up buying 4 packages of ground beef (we were completely out), and four packages of boneless, skinless chicken breast (we still had 2 left in the freezer), so that, along with what we already had should last us more than two weeks. 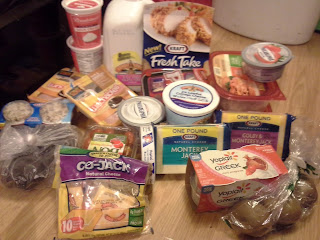 I bought even more cheese that stays in the fridge.  The chunks were the same price as the shredded cheese.  The individually wrapped pieces were on sale 2/$3 for 7.5 ounces, so they were a little more expensive, but not much.  They go in Elliott's lunch boxes, when he doesn't choose something with cheese for his main dish. The produce pictured is avocados, kiwi, and grape tomatoes.  We didn't buy much at the commissary, because I knew we would be going somewhere with a little better selection on Saturday. 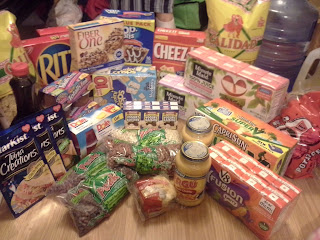 Elliott was just about out of juice boxes, so he ended up picking out 4 different kinds, since they were on sale.  He takes his lunch almost every day and takes a juice box almost every time.  Beans were on sale as well  (I know it's hard to see, but we ended up buying 3 lbs of dry red beans, 2 lbs of kidney beans, and a lb of great northern beans), and we have been eating more of them lately.

I know it might look like we don't have the stuff to put together  meals to go another 2-3 weeks before we go grocery shopping again, but we always keep a well stocked pantry, including pasta, rice, canned and frozen veggies and fruit, etc.  We also did buy a bag of bagels, a loaf of bread, and a bag of tortillas that I just realized weren't in this picture.

We did do a little more shopping on Saturday, but I don't plan on going again until sometime next month.  Obviously my husband will have to go back for fresh stuff, but I'm done for the month. :)

We stock up too. I just went to the meat market and loaded up on $125 worth of meat that will get us through quite some time. I think all in all I spent about $300 this week on grocery items, but now I just need to stop at the store for the basics like milk and fresh veggies for the next few weeks. Sure does make life much easier when you aren't doing big shopping trips each week!

I definitely agree. It makes it a lot easier to put together meals when you have a well stocked pantry, too. I'm terrible about deciding I don't want what I have on our menu plan, but this way I still don't have to go buy stuff at the last minute.

By the time we went elsewhere for fruit and veggies, dog food, and back to the commissary for a few things with coupons, we ended up spending $282 and some change this week. But I think we still did pretty well over all.

Oh my....leaving your coupons at home:)I feel awful, whenever I do not have a big stack of coupons to hand over.

As for shopping when you're hungry, I've done that twice in a row now at ALDI, and somehow the grocery bill just creeps up, because I end up putting doubles of things in the cart. I'm on a big fruit crave these days, which means lots of fruit end up in the cart, whenever I'm hungry.